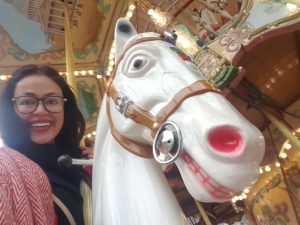 I was the only one on the carousel again today. This time at Hôtel de Ville. Do French people not like merry-go-rounds? Why are these rides always stationary?

I realised that if I lived here, I’d never get anywhere on time because I’d stop at every carousel along the way. They should make one set price for an unlimited monthly pass of rides. Also, there should be a seat selection of horsies on the metro.

I started my day having coffee with Eva, once again, because her company makes my café crėme far tastier than elsewhere. She remembered that I was supposed to go to Montmartre a couple of days ago, so we chatted about my impressions and where to today.

The bar was lined with elderly men standing at her attention, hanging on every word she said. It was quite sweet to watch.

On my way to Place des Vosges, I ran into some kind of kerfuffle. A woman on the metro was tearing a strip off of the woman sitting in front of her. It seemed as though the woman in front had somehow kicked her or got into her space. All I picked up was “Don’t touch me”, “You weren’t raised well”, “You don’t have manners.”

Here’s where it gets interesting. A gentleman sitting with his back to the women turned around and tried to calm the situation. The agitated woman wouldn’t have it and started tearing into him. As soon as he realized that he wasn’t going to get anywhere, he just started mimicking her tone very loudly and speaking in gibberish. This grown adult man on the metro, so well dressed, responding in this way was, to say the least, a show-stopper.

She was as surprised as the rest of us, and went silent.

When he was leaving, he made a point of getting her attention and waving. She couldn’t help herself; she was stifling a laugh and waved back while trying to make as little eye-contact as possible. He got off the metro and stood in the window, continuing to wave; without turning to look at him, she kept waving and trying not to laugh.

Everyone watching started to laugh with them. It’s definitely a memory I won’t soon forget.

Because I have been missing the song of birds, I decided to hang out near trees. Place des Voges is a beauty in the summer, and she wasn’t so bad to look at today, either. But I couldn’t hear birds, so looked to my map for the next green space – literally, at the corner immediately after Victor Hugo’s apartment, there is the Hôtel de Sully garden, just filled with birds. Two of the four walls encasing the garden are covered in ivy which, I am guessing is the it was filled with birds. Foliage is such a party.

It was an approximate 5 km hike back home. At every single restaurant I stopped to look at the menu, on the hunt for crème caramel. Only one restaurant had it, with the English words ‘Custard and fudge’ next to it, so I passed. In hindsight, it was likely poor translation rather than reality. At the very least, I should have tried. Lesson learned. My weekend will be spent hunting, fyi.

Today, I am grateful for:
1. Comfort food like tomato soup, and a side of grilled cheese sandwich.
2. Robert Mueller.
3. That the government shutdown is over. Thinking of you, America.