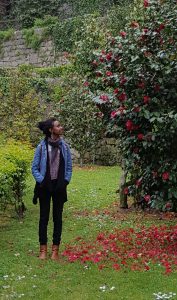 Azza. It means the dear one. We had met only once before, in 2014, sat next to one another on a panel for Min Fami in Toronto. We’ve been communicating since, always with the intention that we would collaborate by writing something together, this magical production which remains in the ether until we in fact get it together and finally get to it.

Today was our last day together; tomorrow she is off to pursue a particular thread which I pray comes to life as she wishes it to, and me to another coastal town for some total quiet and possibly more sand, weather permitting.

There have been many shifts in me these past few months as I inevitably recalibrate and find my balance, where I am neither sliding to this or that side. One of the effects of this recalibration has been a heightened sensitivity to unmet expectations even in the slightest most benign sense, such as not finding the food I had hoped to find and instead eating other food that is absolutely fine to eat.

I said it to Poppy in a general context a couple of weeks back – I feel as though I actually have nothing left to give, and so just zero tolerance for anything at all coming at me from this world, that isn’t exactly as it has expressly been stated it would be.

The root of this situation is simple. I gave too much (which is entirely on me), and am now left with nothing left to give, and no tolerance for the world to ask anything – literally anything – more of me. (Which is nonsense. Because the world doesn’t owe me shit. And though that is usually my starting point, and though I understand it and accept it cognitively, I am not yet there emotionally. But I’ll get there, because it’s the right and in fact only healthy place to be. It’s ugly to feel that this world owes me anything when I already have such an incredible mountain of blessings on the daily, alhamduliLah.)

With Azza next to me, there have been a handful of moments where I had to manage my reaction to something not as it was meant to be. My reaction to these things on a normal day, long before any recalibration was necessary, would have literally been no reaction. But that’s not the case now, and though thing in me hasn’t yet entirely cooled its heels, it wasn’t even close to calming itself down back at end of March when Azooz and I began traveling together.

She has been a God-send. She is calm, and this calm would force itself onto me quicker than I would have imagined. It also rubbed off on me, which I have noticed the last couple of weeks especially since we arrived in Lisbon. Inadvertently, it has forced my hand to recalibrate faster.

I already miss her, even though she’s right here.

Today, I am grateful for:
1. Having someone to chat with at the end of the evening. Someone to walk around a new city with. Someone to send messages to like ‘this place has coffee you’ll like’, etc. Basically, someone to share a life with, really.
2. The good people whom Allah places in our lives.
3. Laughter. Azza and me laugh well together, and unexpectedly. She’s not a laugh out loud raucously kind of woman, so it’s nice when she is caught off guard and starts laughing out loud.