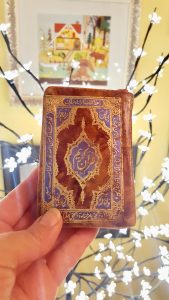 This is my Qur’an. Tonight, my mother told me that from birth, she used to place it beneath my pillow. I wish I could remember when I decided to no longer sleep with it next to me. I’ve reversed the decision, and it will be beneath my pillow now on. It’s an embossed leather case, with a zipper closing itself around the Qur’an as protection.

Daily, and aside from the reading, I am trying to listen to, and reflect on two hours of Purification of the Heart. As I listened to the 8th CD tonight, I noticed a critical thread in all of the lessons; it is a variation of the Christian sentiment to Do unto others as you would have them do unto you.

Rather, it is Do unto others as you would have God do unto you. In this world, and in the next.

If this morning you had asked me if I think about Heaven and Hell, I would have said Only that I am looking forward to going home to Allah (because this world is too often like sandpaper and with Him is Mercy).

If you had asked why do I try to do good, I would have said Because I love God, and it is His guidance and He has never misguided me. Because it benefits me and those around me. Because I don’t want God’s displeasure with me.

Implicit in my above response is reward in the afterlife, but I have never framed it as such in my head. Implicit also, is that when we behave in evil manner, like, say, placing refugee children in internment camps separate from their families, where they are not fed, cleaned, and often sexually assaulted, we are headed straight for hellfire after we wake up from this world, but I have never – before doing something dumb, against His guidance, stopped to think, I really shouldn’t do this because maybe Hellfire. Rather, I have always focused my not doing of the bad things on So that I don’t bring calamity on my head and family in this world.

Innocently, I believe I think like this because He is Rahman (Most Gracious), Rahim (Most Merciful). I focus on His Mercy above all other attributes. They are the ones I recite most, daily. They are the ones we are guided to most, as Muslims, since only the deviant less than 1% (such as ISIS) use the fire and brimstone approach (wholly foreign to Islam past, and modern).

Because ain’t nothin’ gonna happen here that come even 0.00001% close to what a calamity might look like in the next.

A doozy of a reminder to some of us, and a doozy of a necessary pivot for your girl, inshAllah, and thankfully.

Today, I am grateful for:
1. Umar Ibn Al-Khattab (may God be pleased with him). Though I am grateful for all of my Prophet’s (صلى الله عليه وسلم) companions, I love Umar in a way different than the others because of the character qualities displayed in him.
2. My mother and father. They’re super, and I hope to keep tempering myself toward them, because I can never be tempered enough.
3. Anger. It is a necessary human emotion which serves a great purpose (unless you cannot master it, and it starts to run you). Are you angry about the American internment camps? How about the primarily impoverished Black mothers in the US being held inside of the prison industrial complex on minor charges (like trespassing) for months and years without trial, because they cannot afford the bail? I pointed you to them last year and I hope you were angry then and are still angry today; angry enough to put your money where that rage is and support the work of Free Black Mammas (twitter: @NationalBailOut). Use your money; every penny counts.