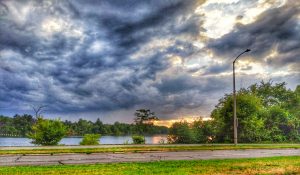 I really love Ottawa’s mood this close to Fall.

Cooking tonight, I thought how I forgot to tell you a story that still has me a little bit confused about its purpose. Because again, like a broken record I will remind you that I do not believe that there is such a thing as a coincidence.

We were pulling off the Queensway and intending to turn left. Stopped at the light, I noticed an old and frail hajji across the street, moving very slowly toward the intersection. He reached the light, stopped, waiting to cross the same street onto which I was to turn left. He had come from the bus station behind him. Navy blue dress pants, a white dress shirt over a white undershirt, and his white hajji hat. He was without a jacket, and pulling a small silver trolley, filled with what I assume were groceries.

It was pouring rain, with very strong gusts of ice-cold wind.

My backseat was full. In order for me to pick him up, I would have to get out of my car, shift everything from the backseat to the trunk, and pack his trolley somewhere between my backseat and my trunk. I knew that I wouldn’t let him help me but rather I would force him into the car where he could be sheltered. Because this is the whole reason I was considering picking him up – to provide shelter.

I turned left and considered all of the inconveniences to me should I pick up this man.

I passed, he was to my right.

There is nothing in this area. Nothing. He was small, and frail. For an able-bodied individual to get to anything close, they would have needed an easy seven minutes. At the rate he was moving, he would have needed perhaps 14.

I decided to turn around and pick him up. This took perhaps a total of one minute. Let me instead state two minutes, for the sake of a very generous timeline.

By the time I reached where he should have been – barely across the street, he was nowhere to be found. Nothing. Not a trace.

Further, there was no one loading an old man and a trolley into any car.

Again, he could not have possibly sought shelter. And, there is no way anyone could have pulled over, and placed both him and his trolley into their car in such a short span of time. Absolutely, I would have found them still loading his trolley.

I drove past twice, completely bewildered.

Momma was in the car with me and she too had seen him. Equally, she was shocked.

He was ‘real’, in the sense that he was visible.

But was he REAL? In the sense that he was a human who had a beginning and an end.

My mind still boggles at the thought of what happened. I won’t write that ‘There is of course a logical explanation’, because my logical would fall outside of your logical in such circumstance. Because here, my Muslim brain kicks in.

I think. I think he might have been a test.

At the cost of your discomfort, Maha, will you help another?

Which. If this isn’t a metaphor for so much in my life, I don’t know what is.

Today, I am grateful for:
1. Doing the dishes. Because this means I have food to eat.
2. Thick grey skies. Because they bring water.
3. The little book which Laurence saw, thought of me, purchased, and gifted me. It has become my Mindfulness journal and I love everything about it, from the size and shape, to the colour, to the feel of the paper inside of it. ❤️