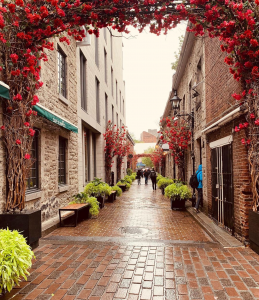 My family’s in Montreal until tomorrow, and The Cloud Cave is so quiet without them. Sad emoji. (They sent me this lovely image from the Old Port. I can’t wait to get back to Montreal without all of these French verbs, inshAllah.)

Speaking of the weight that we carry, it always intrigues me when I have to deal with the misogyny of men who think they’re smarter than they are. I’ve been meaning to tell you this story all year, but keep forgetting –

Once upon a time, a munaafiq clown-man brought up Muhammad Ali’s womanizing. It was within the context of how great Ali was (and remains) to Islam / as a Muslim. The subtext, however, was this man’s way of comparing his own jet-setting and womanizing to that of Ali’s, and justifying it accordingly. The sub-subtext of which is that he too is as great for the Ummah as Ali.

If Ali was so great, and still a womanizer, then certainly I too can be this same, I imagine his inner dumb might whisper.

Except, lols. And nope.

Clowns please. Don’t ever compare yourself to Ali. First, there’s maybe all one of you doing today for the Ummah what he did, while the rest of you are lying to yourselves and everyone around you that you’re doing it for the deen.

(How’s that money lining your pockets, you ridiculous and transparent buffoons?

It’ll be hard to catch the book in your right hand while you’re clutching money in that fist so hard, brother.)

Second, Ali’s womanizing was in his NOI days. Sit down, everyone playing ‘devout Muslim’ while womanizing. You’re embarrassing yourself.

Which brings me to the point of today’s PSA – misogyny, in which womanizing is rooted, is an ugly thing no matter which Faith (or not) wears it. The Old Boys Club is for all kinds of dumb and insecure men who need to dominate women because they can’t exercise dominion over their own selves. Read that again, please.

Our Ummah has never been immune, and in fact, this nonsense seems to be increasing in very particular circles.

Saying Ash-hadu anna laa iLaaha illa Allah has never been a veil for your bullshit, akh. We have always seen you; that we once gave you a pass is due only to the requirement that we make seventy excuses.

Do better, or join the circus and stay where you belong.

Today, I am grateful for:
1. Vulnerability. It’s a scary place, become scarier for me than I had previously understood. This one’s going to take some getting through.
2. Rage. It’s cyclical, which means that it’s temporary. But it’s never easy. I have to be grateful for it, so that I don’t suppress anything that needs to bubble up and out.
3. Balance and moderation. Because I have neither, and so hoping that Allah will grant my sorry ass at least a modicum of these things.