The Company We Keep 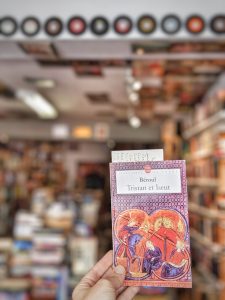 During lunch, I went to one of my favourite bookstores in search of Le Petit Prince in French. Instead, I found this treasure which I have read neither in French nor in English. I am interested in finally learning this particular tragedy.

As you know, each night I watch an episode of French television; these days, it’s the show Mindhunter (which, frankly, I’m not sure I can continue because Agent Ford is such an insufferable and arrogant little shit. I don’t care if he’s supposed to be highly intuitive; his character is mired in an arrogance that has made it impossible for me to be interested in anything he might do / perform well. I’m only here for Bill, and Wendy).

Anyway. The following is a quote from the most recent episode – When we empathize with a psychopath, we actually negate the self. We deny our own beliefs about decency and humanity.

I turned the show off at this moment because these two sentences sent my mind racing.

Empathy means sharing the feelings of another.
Psychopathy is the personality disorder ‘manifesting itself in extreme antisocial attitudes and behavior and a lack of conscience’.
To share the feelings of someone without a conscience means that we too begin to see things through this same lens, else we can’t see them at all. Remember, empathy versus sympathy here is key.

I actually don’t think this definition stands with respect to only psychopaths, but equally to bonding with sociopaths.

We have all dealt with at least one sociopath in our lives. (Hopefully, none of them remain in our lives.) In order for us to have allowed them into our lives, we would have had to disassociate from our own sense of wrong to some, if not all degree. Because here’s the thing – while I have friends who do a lot of shit that I would never do myself, it’s not behaviour even close to morally indecent or inhuman. When I have come across such behaviour, I have bounced these people from my life. I may be many things, but a hypocrite is definitely not one of them.

I can write about this forever. Suffice it to say that all of this reminds me of Allah’s words, meaning “…and pay no heed to any whose hearts We have rendered heedless of all remembrance of Us because he had always followed [only] his own desires, abandoning all that is good and true [meaning all bounds of what is right].” (Qur’an 18:28)

PS. Wanna know if you’re a psycopath? Head on over to the famed Hare Psychopathy Checklist.

Today, I am grateful for:
1. Every day which goes by without physical, emotional, or spiritual ailment(s).
2. Sleep. Thank you for the rest.
3. A healthy childhood with neither neglect, nor abuse.