The Day With The Sun 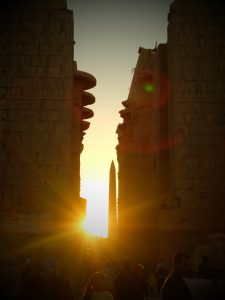 I am writing this while floating down the Nile toward the Temple of Edfu, and having a cup of fantastically strong tea.

Today is Winter Solstice, and so once more, we woke before our part of earth had rolled over to greet the sun. This is one of two days annually when the sun, as we move towards her, we do so at the exact spot which allows her to hit and light perfectly the entire Karnak Temple. What a beauty it is to watch. (The second time of year this happens is on Summer Solstice.)

Imagine the astronomical exactitude by which the Pharaohs had to measure in order to achieve this? I can barely swing a math compass; surely, during ancient Egyptian times, I would have been exiled for complete uselessness.

Later, we went to Luxor Temple which was far more to my liking. Karnak felt like it was dealt by Liberace, while Luxor had more discreet and sporadic decor, including the approximate two or three story statues at its front.

Here, I could have spent all day people-watching. My favourite, being two elderly English women, one with a cane. They were gliding across the Temple floors slow and smooth, laughing at each bad joke made by their guide. Good on them both; I hope Egypt is only one stop on an adventure of world touring. I want to picture them everywhere, like Waldo.

After returning to our cruise ship, I spent a quiet afternoon reading, waiting for the sunset. Figured that since we’ve had such long dates her and me, it’s only right that I also pay equal attention when we leave one another. It was peace-filled, cut only by children. Over the course of three hours, there were no less than 50 of them waiting at the shore to wave and yell Hello. I popped up from my book to reciprocate every single time, thinking what a colourful way for an afternoon to roll away from all of us, in water, and ashore.

Today, I am grateful for:
1. Fresh air.
2. Potable water.
3. That I am able to get out of bed without assistance.