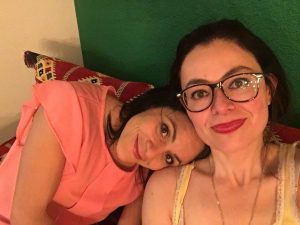 It’s only a few years between us, but technically true. She says she doesn’t feel it because I treat everyone with the same level of respect; I think she’s being kind because really, I am a buffoon who often behaves like a 7-year-old and this is why she doesn’t feel as a ‘baby’ sis. She’s Director of IRIN (formerly the news arm of the United Nations), which is rebranding officially to The New Humanitarian. Strong rec that you check out their work.

Heba sent me a pdf of how to get to her apartment. A pdf in which she forgets to include the actual street address, turning my afternoon into the absolute most fun treasure hunt of my life. Because I forgot that she sent the address separately. Clearly, I eventually exercised my brain and found it.

The last time I was in Geneva was for a quick 24 hours and she hadn’t yet found her way to this beautiful little city (which I will get to in a second). First, can we all please get on board with buying gifts for others which we ourselves wish to receive?

Look at me displaying them as though they are jewels. I was so excited to give her the gift which I would eat that my hair stood on point. (Yes. I prefer an Angelina macaron to those of Ladurée because there is more meat to each bite. Are we fighting? We might be fighting.)

I took the train here from Paris, something which I had not before done. The French countryside is all (usually) cream-coloured stone homes, their hats a burnt and deep red, built around a church which peeks out highest from these little hillside clusters. Peppered between them are ponds and lakes all along the Northeast of the ride, the colour of which I have not seen before – near neon aqua. It was stunning to the naked eye. Is it…is it pollution? Please don’t answer this question. (This sad and not-doing-justice-to-the-actual-colour image was taken on my terrible mobile camera because my Fujifilm X30 busted. I will be using Heba’s camera for my time in Geneva as of tomorrow, inshAllah.) 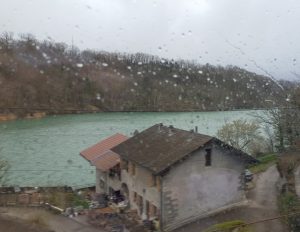 Now, Geneva. A few immediate impressions as I was wandering the streets. First, that I saw so very many faces of Colour, which was a lovely way to be greeted. Second, that ethnic restaurants are everywhere. This was not the case in Tunisia, and though Jenn says that it is very much the case in Paris, I was not seeing it in the same way I saw it here. Indian, Thai, Vietnamese, all manner of Arab at every single street corner and I was beyond myself. Ultimately, I chose Ankara Kebab (20 Rue de Monthoux) because of the smell which grabbed my hair and pulled me in as soon as I tried to walk past.  Definitely, I’ll be back tomorrow because it’s a hang-out for old Turkish men hiding from their wives, I think. Aside from the kebab being excellent, I liked hearing the word Allah so often in conversation, but I especially loved that one of these old men answers his phone “YES MADAM” when his wife calls.

Thirdly, there are as many barber shops in Geneva as there are rice pebbles (I can’t remember what they’re called. It’s almost 1am. I’m tired) in biryani. Do Swiss men have a hair situation of which one ought to be aware? I am genuinely perplexed.

But not as perplexed as I was by my fourth observation which is that Swiss men are extraordinarily  friendly. The first man stopped to chat with me while I was at the lake trying to neither be attacked by a swan nor get frostbite. The second and third struck up conversations with me as I was walking along the street. This is apart from the men giving away very wide and friendly smiles and nods. Are they drunk? I hear alcohol is very cheap.

Unlike breathing air, which will cost you your firstborn. Fifth and final observation? The cost of living is shocking. A bag of chips is CHF 6, approx $8 Canadian. Maybe they yodel to keep their mouths busy since no one can afford to eat?

I’m taking up yodeling. Look for me atop an Alp.

Today, I am grateful for:
1. Having completed my manuscript (with the great help of Azza, because it was too hard to on-my-own choose which poems were to be cut). Tomorrow I will review it one last time and then hit send.
2. Having made it through a surprise! challenging weekend, to the normal and once again neutral place in which I had been prior to Friday.
3. The freedom provided by this Sabbatical. Two days ago, Heba asked me whentf I was getting to Geneva. And, well, here I am.