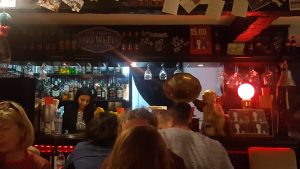 In the English language, a dog’s language is translated to either ‘ruf ruf‘ or ‘woof woof‘. In Arabic, it’s ‘3aw‘.

Which is what I thought the Spanish speakers were doing with their laughing noise of ‘jajajaja‘. Meaning, I was today years old when I put 2 and 2 together, and realized that their j is pronounced as the English h and so they make the same hahaha laughing noise as us English speakers.

I am as dumb as you are currently thinking, friends.

Fun Fact: When a Spaniard detects you don’t speak Spanish, they just keep speaking to you in Spanish anyway. Full conversations, with extra paragraphs and footnotes. Possibly an epilogue, too. Unlike the Portuguese who just stop dead in their tracks and smile and everyone enters an unholy and awkward silence staring at one another until the foreigner yells AMOR PASHTEESH! and everyone smiles and hugs. I wager this is due to different colonizing experiences, yes?

After a day I could have done without, spent mostly dealing in emails, I decided to catch a traditional Fado show, and what an experience it was. Her voice. And range. Oh my God. She was a duplicate Lhasa.

I have said before how I wish that song-birding was my super power, and Lord. Oh Lord, how I wish.

It was an extremely small and old joint in our Alfama neighbourhood called A Viela do Fado (R. dos Remédios 111). The place sits 26 people, and when the performers took to their corner, they turned off all lights, and performed against a red light only. It was as gorgeous as you might imagine. (And as impossible to photograph on a camera phone.)

There were only three chairs open, and I was sat next to a heckler. Because of course I was. The sad fella was kicked out and sent home; apparently, he is the known neighbourhood drunk.

The singer, Jessica Fernandes, was also our hostess and server, and that is her smiling behind the bar between sets. We’ll do more of these shows in Porto, and I’ll aim to come back to her again once back in this city, before heading home, inshAllah. It was a welcome end to a day whose course I couldn’t wait to run. Tomorrow, to Porto.

Today, I am grateful for:
1. Spanish olives. If we had to eat Portuguese olives instead, we would Jonestown our shit.
2. Sending in the last piece of rose-water syrup’s puzzle today.
3. Well-made umbrellas. We are headed to another coastal city tomorrow where it’ll be raining. These umbrella (which I don’t presently have) really are a blessing.