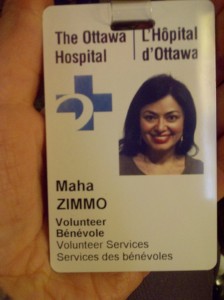 Editorial Note: The following views have nothing at all to do with either the official staff or volunteers of The Ottawa Hospital, but rather are entirely One Female Canuck’s. Because it is only the later who is dumb.

Yesterday was my Orientation. Some of you may be thinking that everyday in my world is “Orientation” which, I mean…fine. I accept that.

One takes said Orientation with all new employees of the hospital. Everyone, including Physicians. And you would think that they are keeners who sit at the front of the class, right? No. The only keener present was me. On my side of the auditorium, I was the only one who propelled herself at high speed right to the front of the class.

I was walking so fast I almost fell and broke my face.

I WAS SO EXCITED TO BE TAKEN SERIOUSLY.
I AM A SERIOUS VOLUNTEER.
SO SERIOUS I AM YELLING BECAUSE I AM STILL SO EXCITED.

They gave us the rundown of everything, which basically amounts to:
Be nice.
Treat people like you want your loved ones to be treated.
Don’t date the doctors.**
Only the surgeons.**
Wash your hands because otherwise you will kill people with the gross bacteria you are transporting from one to the next.
Pay attention to people.
Never run away from them.
Don’t wear denim.
You can’t see all disabilities. In fact, you can’t see most disabilities.
Disabilities don’t cause hardships, but rather an inaccessible environment does. (Said the wonderful man, at the bottom of the auditorium, which only had stairs.)
Service animals are working. Don’t play with them, dumbass.

And always remember: To provide each patient with the world class care, exceptional service and compassion that we would want for our loved ones.

I watched and learned and I was riveted. I am now officially a part of this incredible team of people — setting aside the Doctors and Surgeons, let me say the following about nurses: They are amazing. They are AMAZING. And they are underfunded, and undervalued, and under appreciated. Exactly like teachers because we have our fkn priorities ass backwards, if you hadn’t noticed. Because we pay those who play pretend exhorbitant amounts of money, while we cut funding from our caregivers and educators. F/ck you, System. F./ck you, hard because what a disappointment you continue to be.

And now, I am a little buzzing volunteer who can maybe help take the weight off of the shoulders of these incredible individuals. And maybe I can make people smile, and I can definitely hang out with them on Christmas and New Year’s and pay attention to them.

But not before I know what in the shit I am doing. Because I had to wait for an hour before I could have my photo ID completed (wherein they squashed my head, and I am contemplating legally changing my name to BlockHead SuchAndSuch), and while waiting, I attempted to complete the Self Guided Campus Tour. Which is another way of saying I got lost for an hour and couldn’t find anything because the architect is a man named M.C. Escher.

Truth be told, it was fun to get lost. Because now I know where every toilette is, so anyone needing to go to the Washroom, I’m your gal! The Volunteer coordinator told me I was funny. I don’t think she meant like comedic funny, but funny because I was so excited.

WHAT’S THERE NOT TO BE EXCITED ABOUT?
DO YOU KNOW HOW MUCH I AM GOING TO BE HELPING PEOPLE?

Speaking of which, I had to have a criminal record check completed. Totally awkward and weird. But I am as clean as a whistle. Hurrah!

I have one more step to complete before I may work directly with patients, and it is to have my second tuberculosis test completed. InshAllah, they will inject my arm with this on Friday, and by Monday we will confirm that all is well (since the first one came out negative).

Until then, tomorrow specifically, I am relegated to the Gift Shoppe. I can’t deal with patients, but I can smile at them and wave at them from the Gift Shoppe. While waiting for Banksy, I plan on fogging up the glass and drawing them hearts.

==========
**They didn’t say any such things. I am the as/hole who just did, for your amusement. Because, precisely like a monkey, I am here to entertain you.

14 thoughts on “Ottawa Hospital Volunteer: It’s not like Grey’s Anatomy”