Respecting one another, bridging the gap

January 7, 2013 - Faith, Mindful Living - Tagged: Christianity, fearing the unknown, fearing what we do not understand, interfaith dialogue, Islam, Judaism, religion, respecting one another, the human condition to exclude, the root of hate, understanding instead of disrespect - 21 comments 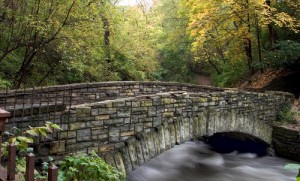 There is a very strange inclination in the human situation; we default to exclusivity.

Building bridges, mending gaps, shortening distances between ourselves is not an act most of us perform wilfully. Rather, we are more comfortable sitting in a state of exclusion, preferring to define ourselves by what we are not, rather than the commonality within. This, the baseline of Otherness.

There’s a key element missing in our treatment of one another, which I believe is the contributing factor to this wilful exclusion: Respect.

Extend and elevate this thinking to something as personal and as intimate as Faith.

Islam was premised on this notion of respecting others – one of the core principles of our faith is to accord full respect to every religion which has belief in God as its focal point. A shining example of this is a hadith about the Prophet Muhammad (pbuh), who in the year 10 H, gave free access to his mosque and full consent to the Christians to celebrate their religious rites within this mosque, although their adoration of Jesus as “the son of God” and Mary “as the mother of God” were fundamentally at variance with Islamic beliefs.

Did you catch that?

One of God’s Prophets did not try to convert, change or annihilate another great Faith tradition; instead, he honoured it by bringing it into his home and allowing it to exist as is.

Too many in this world continue to be told that they are better. Taught that they will go to Heaven while most Others will not. Generations kneaded with disrespect, supremacy, and hatred, instead of encouraged to build bridges and find commonalities among their brothers and sisters in humanity.

For me, there is so much heartbreak and shame in this, how so many of us have chosen to position ourselves above others, and use Faith as the reason to do so.

For the longest time, Muslims understood “Islam” as to surrender, based on the idea that God placed us on this earth so that we might worship Him and nothing more. I never understood this, because I couldn’t wrap my mind around the concept that Allah would grant us free will and then ask us to simply surrender — this perspective always seemed like a little sick joke for me and so I was never able to fully embrace it.

Then I heard Tariq Ramadan speak about Islam as a means to peace; that to enter into a state of Islam, is to enter into a state of peace within our hearts. And that, dearest Reader, makes complete and total sense to me. Because for me, Faith can not be about God’s need — since He needs nothing — but rather about humanity’s need. And clearly, we need to bring peace into our hearts, else we will Lord of the Flies it into infinity and beyond.

Which brings me to my next point…

Connecting Islam to earlier revelation
In the Quran, God said: “Behold, We have created you all out of a male and a female, and have made you into nations and tribes, so that you might come to know one another.” (Al-Hujurat 49:13) Not so that you may hate or hurt or oppress one another. But rather to engage, to learn, and to love one another. Who in their right mind would ever believe that God seeks to create divisions in His own world meant to create trauma rather than an opportunity to something better? This is our choice where different faiths and ethnicities and belief systems exist, and anyone believing differently is headed for fundamentalism.

Sadly, and most notably in 2012, very few of us afford this principle room and space within our lives because we don’t care to, we are too scared to, and / or we are more comfortable believing that We are better than Them.

Because. BETTER THAN WHAT AND WHOM?

A drunkard Muslim who beats his wife is better than a Christian man who treats his family with mercy and asks God’s grace? An oppressive Jewish settler who invokes God’s name every time they thieve Palestinian land in the name of some fucking divine writ is better than the atheist taking to the streets to demonstrate against oppression, genocide and apartheid? A psychotic Christian who goes on a murdering spree in the name of Christianity, as a means to defend against encroaching Islam is better than a non-Zionist Jew who sits firm in a Palestinian orange orchard while an Israeli demolition team faces them down?

Do you really believe that God has made you better, by default because of your ethnicity or the religion into which you were born (or later adopted)?

You are best only when you understand that you are one of a whole, and that whole belongs to Him and Him alone.

Building bridges is a choice, and it is a choice at every single turn. Further remember that bridges aren’t only built where similarities exist, but they offer a space where people can meet and say “we are not the same, but within that difference, I respect and honour you still, because we are of the same Whole, and we all belong to and shall return to Him.”

I hold fast to my belief that the respect we extend to others is a direct reflection of how much we value and respect ourselves. Choose wisely, and happy Sunday.

21 thoughts on “Respecting one another, bridging the gap”