I was asked: ‘Tell me about Ramadan’

And I responded with a variation of the following. Because I talk too much. 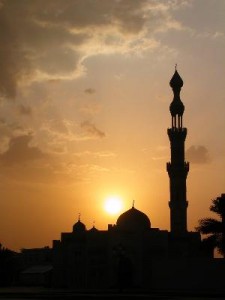 ‘Ramadan’ is the name of the month (like October or November) and the Muslim calendar, like the Jewish one, is lunar. As such, and unlike the Gregorian calendar, the dates are never solids, but rather shifting, so the beginning of Ramadan precedes the last year’s beginning day by 11 – 15 days.

In Islam, there are 5 pillars of faith, of which fasting during the month of Ramadan is one.

In many other religions, fasting is usually associated with the intention of self-mortification in order to bring about the freeing of one’s soul. This is not the case in Islam; because we replenish in the evenings, the discomfort – and that is really all it is – is minimal and without the intention of physical long-term stress or trauma to the body. Those fasting do no eat, smoke, drink (not even water or gum) from sunrise until sunset. Also during the sunny hours, there is no sexing to be had. Exempt from fasting are the ill, those who are on any form of medication, nursing mommas and menstruating women.

Fasting is the only one of the 5 pillars for which God did not provide a clear Why. In the absence of this concrete direction, we are then free to negotiate the reasons behind fasting, as follows, and as though we are at a buffet – choose one, or all, or none of the following reasons:

(a) It is to hone one’s self discipline and self-control. Let me assure you that fasting is no easy matter, most definitely not during the long summer days; but, at the end of the 29 or 30 days, you wake up and think: I can do anything. To fast is to practice endurance and generate more self confidence, patience and determination in the face of a very difficult physical task, reaffirming that one is master over their body, rather than slave to it.

(b) Fasting reminds us that it is a *luxury* to walk to the sink and safely access a clean glass of water when we’re thirsty. That it is a blessing to feel hungry and run out and pick up a burger or a pizza or a fruit, etc. When we consider the levels of poverty and death from starvation that occur at a sick rate on an hourly basis, this reason is unmatched and critical in any fight against apathy.

(c) The lack of reliance on food (or drink or sex or cigarettes or anything external) as a source of comfort and self-soothing forces our hand into a time of self-reflection and awareness. A part of the process very naturally becomes about taking stock of one’s last 12 months; to remind oneself of their personal running list of actions / behaviours with which they are not entirely comfortable, and situations in which they could have been kinder. [Personally, I try to remedy where I can, take note and change where I can not, and ultimately take the coming year to remove influences which I believe are not too healthy (emotionally, physically and spiritually)].

(d) Cleanse and reboot our physiology, as illustrated by the my amazing and lovely sister, Dr. Noreen K.

Pillar #2: Declaration that there are no gods but God (and that his final prophet is Muhammad)

Implicit in this are that Muslims must also believe:

– In absolutely all prior Prophets beginning at Adam, through to Abraham, Moses, Noah, Jesus (peace be upon them), etc.,
– In over 250,000 Prophets whose names have been lost over time, and culminating in the reality that
– This (to me) is God’s way of asking Muslims to respect all faith traditions, no matter from whom they came as they may be among those whose names have been lost

Pillar #3: Paying an annual tax of 2.5% on your unused assets

To whom you pay is based on your individual choice alone with one clear stipulation — that it is preferrable to take care of orphans.

Me, I have several orphans whom I have taken care of for years. I also donate to Carleton’s center for the study on Islam, to environmental organizations, to the Ottawa mission for men, to the war amps, to women’s organizations, UNRWA, to relief organizations during the year and as needed, and to cancer research.

While I work hard to earn my money, I recognize that: (1) I am blessed by the ability to donate freely and without feeling pinched; (2) the money I earn is, at end of day, not really mine; and, (3) this tax is a way to purify the money to the best of my ability. Because every penny has come at the cost of someone in our society where profit > people.

On that last point, I get it – we’re not mining and trading blood diamonds. But everything in this world is connected in one way or another, and so at some point, my money is drenched in someone’s blood. This tax, and all donations from me, I view as a way to purify what I earn.

Pillar #4: Prayer five times a day because like yogis, Muslims know what’s up.

Pillar #5: Performing Hajj once in your lifetime if you are able and have the money.

Where one has neither, then the intent to perform Hajj is all that is required.

May your month be a blessed one, Muslim or otherwise xxo

P.S. to the P.S. If you are interested in a starter-book about Islam, I encourage you to consider reading Even Angels Ask by Dr. Jeffrey Lang, a scientist and convert to Islam. It is is a must-read for anyone attempting to understand Islam, or curious about the heart of this religion.