The Torrential Downpour In Cascais 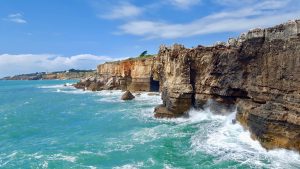 Azza has now noticed it, too. That Portuguese men appear to have on fake eyelashes.

I would be lying if I told you this doesn’t lead to a lot of staring and also a lot of wanting to reach out and touch their faces.

Now that that’s out of the way, I can tell you about my day, which I spent in Cascais, a gorgeous coastal town. I will post photos to instagram tomorrow, inshAllah. A quick 45 minute train from Lisbon, Jilly and I explored a different part of it in 2015, between São Pedro and Estoril (both to the East of the Cascais train station). Today, I walked West to see Boca do Inferno. I’ve not yet visited the Cliffs of Moher, but imagine this to be somewhat similar, though on a smaller scale.

My walk toward and beyond the Inferno was hot and sunny. To the North, I could spy one massive and unending black cloud. I have mentioned that it has been raining in Portugal, yes? After walking for about an hour, and finally accepting that the cloud was no longer in the distance, but rather overhead, I turned back.

No sooner had I turned back did it start to rain. Not just a splish and a splash, but enough that my jeans, from the ankle down, were soaked within 10 minutes. Enough that though my mobile was in my back pocket, water got into the cord attached between it and the extra battery and killed the cord. Enough that I had to remove my chucks, to take off my socks and ring them out, at the station. I wrapped my sad little toes in tissue and slipped the runners back on in very much the greatest state of agitation and distress.

I was “squish squish”-ing every move, and everything had to be washed as soon as I entered the apartment, myself included. It put me in such a bad that I found a merry-go-round but didn’t go on it because I felt so gross. Of the 45 minute walk back toward the train station, it poured for no less than 40 minutes, and I was left wondering how long before one has trench foot, the condition discovered in WWI and which eventually leads to blisters, ulcers, and even amputation.

I am nothing if not dramatic; I would have made less of a splash had I flung myself from the cliffs, and been drier had I swam the coast back to Lisbon.

Which would have saved me the trouble of what happened next, when I attempted (and failed) to return to our apartment. I wrongly presumed that the train station would be called something simple like LISBOA CENTRO. Of course, it was not. It is called Estacao da Santa Apolonia. How could I have missed this?, What could possibly go wrong?, asked the girl who couldn’t wrangle open a bottle of water.

We arrived at this station and I sat waiting patiently for the train to continue moving East toward LISBOA CENTRO (I am petitioning for a change of name). We sat for a longer than expected period of time, I thought. My feet are cold and it’s like they’ll never dry, I thought some more; I can’t wait to get home said my small brain. Staring out the window forlornly, my brain maxed out its capacity and kept going – thoughts of warm socks and space heaters. I also even had some brain power to wonder to myself look at how familiar everything is, how familiar are these sites, so familiar I should take their familiarity as a signal that I might have arrived. Such! Familiarity!

Instead of moving an inch or two to look and see if I had in fact arrived, I held onto my seat as though it were the hand of God.

Until the train inched. Backwards. West. Toward Cascais, once again. Which means we were pulling out of the station at which I should have disembarked, and it was not called LISBOA CENTRO. Which also means that everything had been familiar, because everything was in fact familiar.

I contemplated staying on the train until Cascais and returning with it, so I wouldn’t have to feel my cold and wet feet, and because it really is such a lovely ride along the water. But my feet just wanted warmth and dryness, so out of respect for them, I got off at the first stop, a full 45 minute extra walk to the 45 minutes from the train station to our apartment. I hauled my ass home, quietly, ignoring my feet, and only getting lost one more time.

As Azza said, at least I got to see a new neighbourhood.

Today, I am grateful for:
1. The absence of any kind of tumult. When “there’s nothing going on” is actually the best time in our lives, it seems.
2. Not having trench foot. Clear as day, this blessing.
3. Umbrellas, even though mine was inside out and broken into pieces by the time the downpour was over. Though it was no better than a plastic bag, with some steel attached to it, it was still definitely not a plastic bag.