The Playing In Traffic 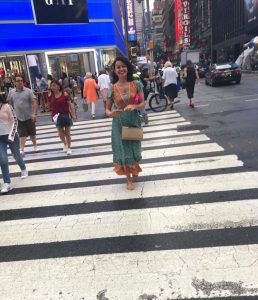 He was the son of our neighbors at the time, only a year older to my 13, a man worthy of my secret crushing. He was the cool one, always at the gym, always busy, always with his equally cool friends while I ate Twinkies and chips, and coveted from afar in my knee high socks, awkward shorts, puffy hair and glasses covering half of my face always slipping forward.

As a child, I would have followed him anywhere and on one unfortunate day, I did just this. He said we should go across the street to the store (where they sold Twinkies), and so I scrambled to pull up my socks and follow. I was so excited, my glasses began to fog.

As we were about to cross the street, we noticed that the You Should Not Cross But If You’re Already Crossing Then Please Move Yer Ass hand signal had begun to flash. He said we could make it and so began to run. Naturally, I followed, only was incapable of running as fast as him because my glasses were fogged and bouncing, my socks were falling and my hair was getting bigger with every gram of humidity, beseeching that I pull back and go home.

He made it to the median safely.

Ya girl had been hit by a car.

Thanks God I wasn’t run over, but merely knocked over, and so what could have been complete devastation was just a broken femur. Cue 5 weeks of traction in a hospital bed, 6 months inside of a body cast, 2 years of physio therapy to complete the cycle, my parents staying together longer than they should have because of this trauma to the my potato ass which they had planted and reaped together.

No one who hears this story can say they’re surprised. I have never seen the cars as representing the danger and lunacy of a situation; instead, I have always, and continue to see the possibility represented by the man.

It still holds true, that I will run into traffic if I feel that the right man is leading. I will run out randomly like I have water on the brain, because I choose to believe that people default to good, and when they do not, the responsibility is on them, not me. My only responsibility is to live in a space of gentleness and kindness, ever believing in the goodness of others until they prove otherwise (EXCLUDING THE TR.MP FAMILY AND HIS WHITE S.PREMACIST SYCOPHANTS); to heal and to remain open, because I believe that to give and receive love is absolutely the greatest and most incredible language of the human condition.

In all forms, platonic or romantic, it is in spaces of love that we heal, and grow, where we are challenged to better, and where we soften. Always, I will remind you how necessary it is to continue softening; if you aim anywhere between now and when you leave this place, aim only to soften.

That believed, let me tell you that it is fucking hard to keep such an open heart; it is draining and exhausting and anxiety-filled to be generous in this way. It falls a little short of impossible, which means that it remains possible. And it is not something done for others, but rather it is something I do for myself so that I remain kind in a world filled with too many people who have shut themselves off from love (therefore shutting themselves off from Love).

The loves I have lived have been incredible men, and from them I have learned an enormous amount. But, their time was not for ever after. Truth is, I would not trade any of these men for anything in this world; I would live them again in a heartbeat to land at here and today. In this, there is strength in the ability to still stay vulnerable and open to love in the most awkward, unlikely, and absolutely ridiculous moments of impossibility. Playing in traffic has given me bruises I stare at in wonder and fascination still, representing engaged and active markers of my growing pains as a woman, a sign that I am not sitting on my ass safely on the sidewalk never living for fear of hurting. I feel a tremendous amount of sadness for people who do.

Earlier this week, one friend said ‘You have the naivete of a child, when it comes to love. I wish I could tell you to change, but I know that someday, someone will take the heart you wear so softly on your sleeve and cradle it and take care of it and love it in ways I won’t be loved because that’s what you do for people. A part of your gift is how much kindness and wonder you have for others’; another said ‘You have so much love to give, and I wish you weren’t so open. But then I realize that the way you experience things is something I will never experience. When you feel something, it’s so bright and intoxicating and I will never have that because I choose safety instead.’ Listening to both of these made me sorrow-full, but better this than friends trying to convince me toward a bitter and calloused heart whose arteries have been filled and hardened with the bad behaviours of men without integrity.

As I have never been a fan of cream-coloured not-bruised skin soft as a newborn’s bottom covered in talcum, I am sending this as a love letter to each of the women still playing in traffic, still believing in love, still opening their hearts with abandon, still knowing that there remain a few good men with character, still believing that the pain really is worth the love-fall –

May you each find your regular booty-call in the middle of the streets, and may the men who are smart and blessed enough to scoop you, have the strength to keep you. Because to love strong and fierce, you have to be willing to take the hits just as fiercely, and if it isn’t for love that you will do this, then you have your priorities ass-upside, my friends.

With thanks to Popsi for taking this photo while we were in NY.

27 thoughts on “The Playing In Traffic”